NJNG women talk about the meaning of Women Veterans Day 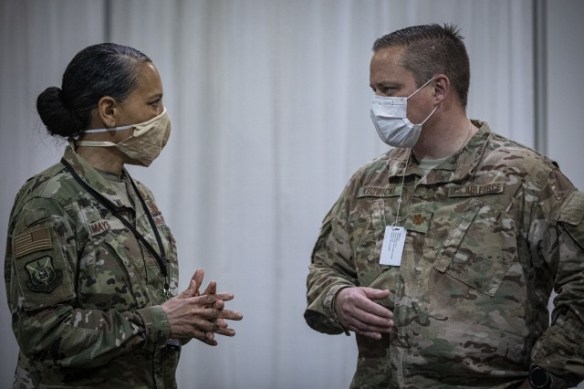 For the third Women Veterans Day, the New Jersey National Guard reached out to women in its ranks for their perspective on the observance.

“I joined the active-duty Air Force right out of high school,” said Mays. “I thought I would earn my way through college by joining the Air Force, and it was the best decision of my life.”

Mays said Women Veterans Day is an opportunity to educate everyone on the impact women have had in the armed forces.

“Observances like this are important so that we understand that it wasn’t always like this, so that we can advocate for one another and make things better for future generations,” said Mays. “To see young people, who I had the privilege of enlisting, and now see them as commissioned officers leading squadrons, those are proud moments for me.”

“I hate running, but I love ruck marching,” said Merryfield. “I love the aspect of pushing myself mentally. That is my favorite thing about the military. I need to prove a female can do it, and I need to prove to myself that I can do what you can do, and then maybe some more.”

Merryfield said she also valued the military for putting her alongside a diverse group of service members. Despite their differences, they all found common bonds.

“When you’re deployed, you’re with each other every single day,” said Merryfield. “You never get a break from these people, they get on your nerves, but they become the closest people to you.”

“Women Veterans Day is an excellent day to reflect on the sacrifices females have made for our country,” said U.S. Army Lt. Col. Patricia Richter, who is also the acting director of the Division of Veterans Services for the New Jersey Department of Military and Veterans Affairs.

“Since 1948, women have been part of the armed forces, and unofficially long before that,” said Richter. “The pathway to where we stand today is filled with sacrifices, tenacity and determination of women who didn’t let anything get in their way. As a woman who has navigated the challenges of being in a male-dominated field, I proudly honor all women who came before me.”