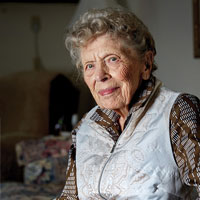 Meet June Fremont, Marine and 'True American'. As one of the pioneering women to serve in the U.S. Marine Corps during World War II, June Fremont chatted with Eleanor Roosevelt, met Harry Truman and marched with other servicewomen behind the casket during President Franklin D. Roosevelt’s funeral procession. END_OF_DOCUMENT_TOKEN_TO_BE_REPLACED

Youth Mental Health First Aid teaches you how to identify, understand and respond to signs of Mental[...]

The Illinois Council on Women and Girls invites young women ages 14 through 18 to apply to join the [...]

Assessing the Needs of Women Who Served in the U.S. Armed Forces

The University of Alabama is excited to invite you to participate in the national survey, “Assessing[...]