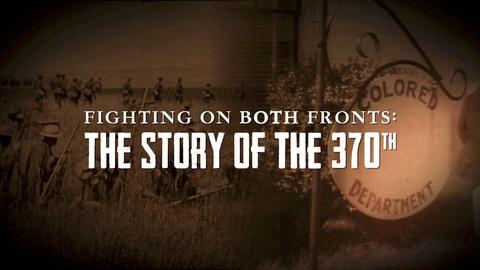 Join Mario Tharpe, the films writer and director for the video
“Fighting on Both Fronts: The Story of the 370th.” who will offer a
public screening and Q&A:

“Fighting on Both Fronts” tells the remarkable, but little known story
of one of the few African-American regiments to have fought in combat
during World War I.

The 370th. African-American unit were America’s unsung heroes – a
group of men from Illinois, largely from Chicago’s Bronzeville
neighborhood.  They fought on two fronts – the war against the Germans
and the war against racism and inequality.  During a period when
African-Americans tirelessly fought for basic human and civil rights,
these fighting soldiers marched off to war to show their patriotism
and loyalty to the U.S.  But when they returned from war they realized
that, despite their sacrifices, the country still denied them civil
rights.

Come out and see the pre-showing of this 30 min. video and follow up
with questions and answer. The pre-screening will be at the following
locations: Please pass this information on to other veterans and
families

If you are unable to come to either locations, the video will start
showing on WTTW PBS Chicago Channel 11, starting February 8th.