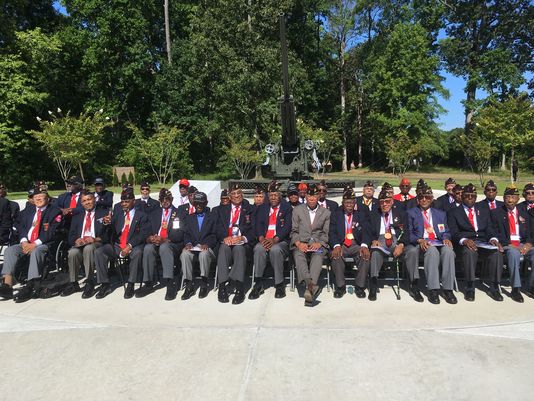 The first phase of the National Montford Point Marine Memorial was unveiled about 75 years after the first black Marines began training here to fight for their country. The crowd included dozens of original Montford Point Marines, many of whom donned Congressional Gold Medals — the highest civilian award bestowed by Congress, which were awarded in 2012.

The Marines were recognized as heroes, pioneers and men who fought for the right to defend their country.

“Today is your day,” said retired Brig. Gen. Johnny Thomas, who served as keynote speaker. “This is your monument behind me. The Montford Point Marines will never be forgotten, and your contributions and legacy will live on.”

Retired 1st Sgt. Barnett Person was comforted by the presence and memory of old friends as he looked upon the memorial.

“This feels very, very good. It is a day I never thought I would see,” said Person, a 1946 graduate of Montford Point who proudly points out he stayed in uniform for 28 years, eight months and 10 days. He earned the Silver Star as a tanker in Vietnam during that time. 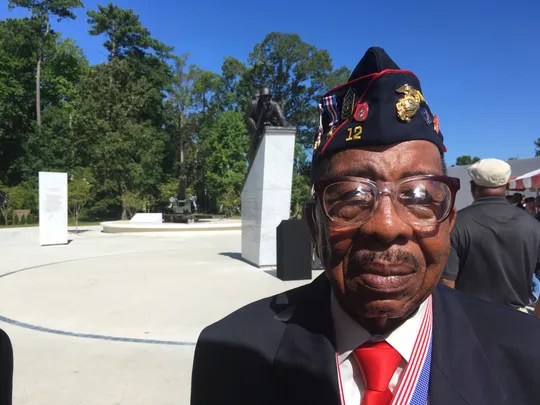 First Sgt. Barrett Person, a Montford Point Marine, stands in front of a new monument at Camp Lejeune, N.C., on Friday. The monument honors men like Person, who were the first black Marines to fight in a segregated Marine Corps during World War II. (Photo: Lance M. Bacon/Staff)

Amid the celebration, his gaze repeatedly drifted to young, uniformed privates and privates first class.

“I hope they continue to carry on, and follow in the footsteps, and complete the mission,” he said. 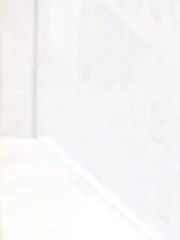 The 900-pound bronze statue and its base stand 15 feet tall. Behind the Marine sits a rare 90mm M1A1 anti-aircraft gun, the primary weapon used by the 51st and 52nd Defense Battalions to which the Marines were assigned. The bronze Marine is seen setting down his ammunition can and taking up his rifle, a symbolic nod to the transition from a support role to one of combat.

The memorial includes three rings that meet in the center and a “wall of stars” that represents the 20,000 Marines who trained at the segregated Montford Point recruit camp during the 1940s.

In the words of Spencer, they arrived, they served, they lived and they endured.

The $1.8 million memorial, now in its seventh year, is being constructed in two phases on what many in attendance consider hallowed ground. It stands at the entrance to what was once known as Montford Point, but in 1974, was renamed Camp Johnson in honor of Sgt. Maj. Gilbert “Hashmark” Johnson, a Montford Point drill instructor.

“Today, this inspiring memorial takes its rightful place among the other silent testimonials to the courage, dedication and sacrifice of our men and women who have worn the cloth of this nation,” said Brig. Gen. Thomas Weidley, commander of Marine Corps Installations-East. “The story of the Montford Point Marines in the 1940s is a uniquely American one — forged by ominous threats from abroad, and shaped by societal struggles and entrenched racial bigotry at home.

Executive Order 8802, signed by President Franklin D. Roosevelt on June 25, 1941, prohibited racial discrimination in the military, but the Marine Corps was not quick to embrace the change. In the eight years that followed, black Marine recruits were forced to train at Montford Point.