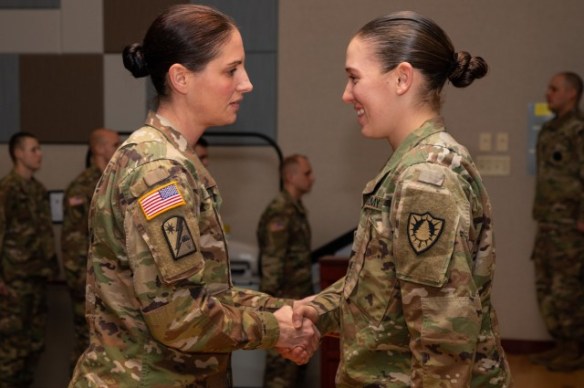 “I wanted to join for the challenge as well as the opportunity for the educational benefits – to help get through school for a master’s degree,” said Magiera. “But most importantly, I enjoyed picking combat engineer to have the challenge and the possibility to be the first female combat engineer for the state of Maine.”

Magiera will be assigned to the 133rd Engineer Battalion in Brunswick and will attend her first drill with the unit next month.

The Battle Handoff ceremony, sometimes called a “patching ceremony,” is the culmination event of initial training. Each Soldier who successfully completes their initial entry training receives their official patch, formally welcoming the Soldier into the ranks. Army National Guard Soldiers wear their state’s unique patch on their left sleeve.

Magiera’s military occupational specialty, 12B, or “twelve bravo” in military jargon, is one of a few combat specialties in Maine. Combat engineers, or “sappers,” construct and destroy obstacles, place and detonate explosives, construct defensive positions and perform general engineering tasks.

“We are excited to take this latest step in the integration of female Soldiers in combat arms positions,” said Lt. Col. Scott Lewis, the commander of the 133rd Engineer Battalion. “The 12B position is very challenging and requires physically and mentally tough Soldiers. The position doesn’t care whether you are male or female as long as you can do the job. We welcome Pfc. Magiera to the combat engineer community and extend an invitation to any other qualified Mainers that are looking for a challenge and a chance to be part of something larger than themselves.”

Magiera joins women across the country who have entered combat arms roles since 2016, when the Department of Defense lifted restrictions on women serving in certain specialties.

Outside the military, Magiera volunteers for the Casco Fire Department, helps teach karate at her Family’s dojo, is pursuing her MBA from Thomas College in Waterville, and plans to also pursue an associate’s degree in fire science from Southern Maine Community College.