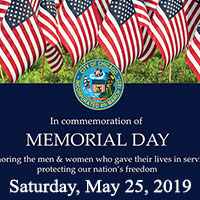 Join us on Saturday, May 25, 2019 in the Chicago Memorial day parade at
12 noon on Wacker Drive between Dearborn and State St. We are number 40.

Chicago’s Memorial Day Parade honors all men and women who made the ultimate sacrifice in defense of our country.

The Wreath Laying Ceremony will begin at 11am on Daley Plaza (Dearborn and Washington Streets). The parade will then step off at noon and proceed south on State Street from Lake Street to Van Buren Street.

During the Wreath Laying Ceremony and Parade, the City of Chicago honors fallen heroes and Gold Star family members who have lost a loved one in the United States Armed Forces to combat operations or while on active duty. Approved by Congress beginning in 1947, Gold Star Lapel Pins and the Next of Kin Lapel Pins are presented to families not as an award, but as symbols of honor worn by family members in remembrance of their fallen loved ones and their ultimate sacrifice.